People are gradually returning home now. They are hosting potlucks, clearing away the rubble, mourning the dead, and making plans to rebuild.

Halyna Sulyma from Novoselivka told us that when active hostilities began, their village was shelled daily. Six bombs fell near her and her husband’s house in one day. The shrapnel riddled the house and injured their livestock. One of the shells, according to the woman, probably contained phosphorus. She recalls that after it, everything around was burning, and she felt as if she had been poisoned. They hid from the airstrikes first in the cellar, then in the summer house. And then the soldiers of the Territorial Defense Forces entered the village. Halyna and her husband let them into the house so that they wouldn’t freeze at night:

“One of the guys who spent the night with us came up to us in the morning and said: “You should leave, there’s a frontline here right now, they’re going to fire from everything they’ve got.” But no one told us about it, even the head of our community did not tell us anything, that we should evacuate. Only that soldier did. In fact, he kicked us out and did the right thing, he saved us…”

Halyna cried, remembering her Territorial Defense savior. She says she is ashamed that she didn’t even ask his name. Later, she found out that the man was killed by the invaders. However, his timely warning saved the family from certain death. “We left, I took the cow, and my husband led the horse. And we left. It’s good that there are good people in the world – they sheltered us.”

They managed to return in a couple of weeks. Their house was destroyed, its windows, doors, and furniture shattered. But the walls remained, so at least they still had a literal roof over their heads. A little later, when Russian troops withdrew to the border, gas and electricity lines were restored to the village. But there were problems with water supply even in June, because of bureaucratic procedures the supplies could not be resumed.

Oksana was saved from death by a trip to the regional center. She doesn’t know what hit their house. Only the walls and part of the ceilings remain where her house used to be.

“When the heavy shelling started, that resulted in the destruction of our house, we were away in the city. It was March 15. We were just planning to go back, to return, as we had a farm with chickens and rabbits, we had to look after all of them. But we were too late. Fortunately. We almost reached the exit from the city just when they started shelling”.

The woman recalls that our military persistently advised against leaving: “They wouldn’t even let us through several times. We’ve been going back and forth since the beginning of the war. It’s close to Chernihiv, convenient. That’s how people managed to get out. Some lived off the land, others, like us, had their own livestock. We did not want to think about invaders coming here. So we traveled. We thought it was necessary to feed the animals, otherwise, they would all die if we did not feed them. It’s not right for animals to starve to death.

So, until the 15th, they were hiding in basements when they were shooting and shelling, and then we left. We took what we had on ourselves. Boots and jackets. And there was nothing left of the house. No property, no car. Everything was blown to pieces.” Oksana’s husband Ihor added that it took them eight years to build their house. They started just a couple of years after the collapse of the Soviet Union. It was hard, but they knew why they were doing it, so they built it to be sturdy and cozy, to live there with comfort.

They were able to return to their destroyed house only at the beginning of April, when Russian troops began retreating back where they came from. Now Oksana and Ihor come here every couple of days to dismantle and sort through the rubble. They say they’re going to rebuild it. Their cat survived too. He was constantly running around the house, which means that a new house has to be built there.

This material was developed by Bihus.Info as part of the program “Supporting Ukraine’s Regional Media in Times of War” with the financial support of the European Union and the Foreign Ministry of the Kingdom of Norway. The content of the article/video is the sole responsibility of Bihus.Info and does not reflect the views of the European Union, the Norwegian Ministry of Foreign Affairs or the Institute for War and Peace Reporting. 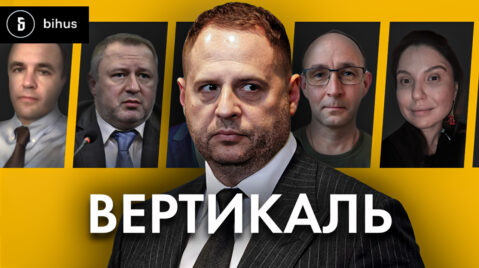