Since the beginning of the full-scale Russian invasion of Ukraine, 347 people have suffered from hostilities in the Kherson Region. Of these, 153 were killed and 194 were wounded. Moreover, the Russian military has been spreading misinformation that it was the Ukrainian soldiers that killed civilian Ukrainians. This is what they said about Tetiana Minlibayeva, a resident of Davydiv Brid, who was killed by a missile the Russians launched at people who had come to collect humanitarian aid.

Tetiana Minlibayeva was 57 years old and had lived all her life in Davydiv Brid. Her fellow villagers remember her as a bright, kind, and always smiling woman. To her husband of 37 years, she was the meaning of life. In the eyes of her only daughter, she was a loving mother. “She was always first, the first to help anyone, even in small things. And she tried to make sure I had the best things, she did everything for my father and me,” Tetiana’s daughter Anastasiya recalled.

The girl lived in Odesa at the time of the tragedy. She continuously persuaded her parents to leave the occupation while the war went on.

“I told them to leave right away. But they didn’t want to, they couldn’t leave the farm, the cows. My mother said: “Where am I going to take them, 18 cows?” They believed that everything was about to blow over,” said the young woman.

According to her, when the Russians entered the village in early March, they behaved calmly.

They only went door-to-door, asking for food and drink. They didn’t touch people,” said Anastasiya.

Minlibayevs were not in a hurry to leave. Eventually, the situation changed, and the Russians began terrorizing the residents, kidnapping, intimidating, and shooting them if they gathered.

“The Russians went into the abandoned houses and just took everything out, leaving the walls bare, as they say. In March, they shot people standing on the street chatting. My classmate’s brother died as a result of the shooting. There were about twenty people who gathered to discuss something about a week before my mother’s incident. The Russians started shooting at them as well. One man died from shock after his leg was cut off by shrapnel,” said Anastasiya.

The shelling of the village began. The Minlibayevs’ house was also hit.

“We have an old house. My grandparents used to live there, and we built our own house nearby. At first, they hit the old house, and the shockwave shattered the windows in our house. Fortunately, at that time, my parents were at a neighbor’s, they had just left, and in 5 minutes there was this hit. And in two weeks, there was another explosion and it hit our house, [now it has] neither windows nor a roof,” Tetiana’s daughter said. The house seems to be standing, but it doesn’t have a roof, windows, or doors

Since then, Anastasiya’s parents have not lived at home; after the first missile hit, they moved in with their neighbors.

“They have an underground garage at home and set up a shelter there. During the day, they spent time at home, and they came there at night and hid there from shelling,” Anastasiya explained.

When the situation got worse, her mother seemed to have agreed to leave. Anastasiya found a car, which was far from an easy achievement as leaving the occupation zone was risky. No green corridors were provided by the Russians during the occupation.

“I called to say that everything was agreed on, that I was going to pick them up, and she said: “No, I’m not going, how can I leave my father? Maybe in a week or two.” Everyone in the village told them: “Why are you sitting here? You need to go now”, but they refused”, said the young woman.

About one hundred people remained at that time in the village of a thousand residents:

“Initially, people took everything that was in the store, the store owners had left and allowed people to take what they needed.”

They had no humanitarian aid. According to Anastasiya, the first batch of humanitarian assistance arrived in May, and the second one was in June: “The day before, my mom called me on the phone in the evening and said, “My daughter, if I survive, I would go to the ends of the earth to see everyone and hug everyone.” ПІДПИС: Anastasiya Minlibayeva could not have imagined that this was the last time she would hear her mother’s voice

She said she would either call in the morning or write if there was no signal. There was no call at 9:00 a.m., 10:00 a.m., and 11:00 a.m. I called, but the call didn’t go through. Dad was also unavailable, but I wasn’t too worried because he turns his phone off to conserve battery. Twelve o’clock, one p.m., two p.m. About 2:35 p.m. Dad called: screaming, crying, I understood that something had happened, but I couldn’t figure out what. It was only then that I realized: “Mom is gone! I’m sorry I couldn’t keep her safe.” And that’s it,” Anastasiya recalled and cried.

As Anastasiya’s father told her, they got humanitarian aid, and her father biked the package home, and her mother stayed to talk with her friend. There were still a lot of people there, because about 70 people had come to get humanitarian aid.

“When he was already approaching our street, he heard explosions: first one, then another. But he couldn’t imagine that was what had happened,” said Anastasiya, her eyes filled with tears.

According to witnesses, when people heard there was an incoming missile, they took to the ground, but Tetiana did not.

“She just stood there, that’s all. She was hit in the back by shrapnel, as my father told me, and both her legs were cut off. One leg was shattered to pieces like a net, the other was left intact. Her ear was slashed near the neck. My father says if she had laid down there would have been nothing left of her because it hit almost exactly where she was standing,” said the daughter of the deceased.

Vitaliy, Anastasiya’s father, didn’t know what had happened at the time, as he had promised to bring the package home and come back for Tetiana.

“Already on the way, a friend told him that mother was gone. I don’t know how he got through it. He was picking up mom by himself, piece by piece. It’s a nightmare,” Anastasiya sobbed.

The husband brought his wife’s body home, dug a hole, and put her remains there. He covered the hole with planks to bury her properly later. The Russians aren’t letting anyone into the cemetery.

“When my dad was carrying my mom (her body), the Russians were sitting in the kindergarten (they were stationed there), saw him, started laughing and asking, “Is that your wife?”. Dad confirmed that she was, and they laughed and said, “You did gather and shell yourself, you do that all the time,” Anastasiya said.

Her greatest regret is that she cannot go home, pay respects to her mother, and bury her.

“How many times have I told them: “To hell with those cows, you can get new ones later if you want,” Anastasiya recalled.

It’s been nine days, and still, every morning Anastasiya waits for a call from her mother.

“I still can’t believe it. I wake up looking at my phone and thinking, “She’ll call or write me any moment now,” Anastasiya said crying.

On June 25, the Russian military launched two missile strikes on Sarny, Rivne Region, at 7:20 p.m. The missiles were fired from a plane in Belarusian airspace, according to the head of the Sarny District State Administration, Oleksandr Kokhan. 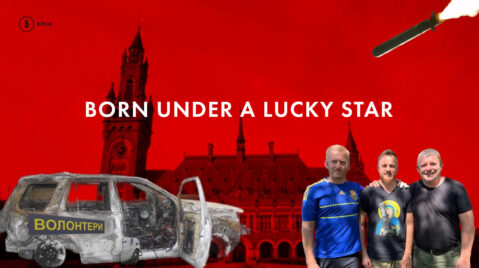